You are here: Home / Increase sales / Estimating Your Stream Revenue With Streamloots 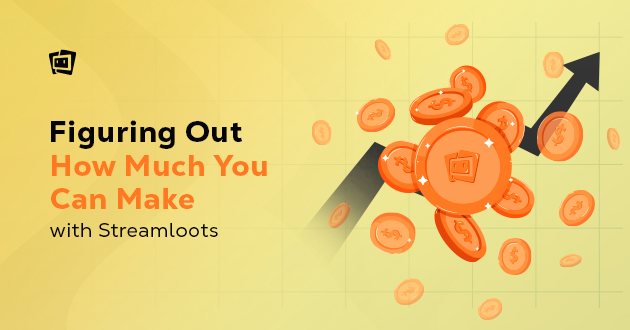 Getting started with Streamloots can have a major impact on your channel’s growth and sustainability as a creator. As with any business, when managing your work as a creator, it’s essential to understand what you can expect as earnings from your streaming and creative initiatives.

Predicting how much money you’ll be able to earn every month with Streamloots is not an exact calculation, as some intangible factors can impact it – like your knowledge, experience, and creativity with the platform. However, according to the experience of thousands of creators using Streamloots, we can define certain variables and best practices that you can use to estimate what your revenue with Streamloots can be within your first months.

Today’s article will provide you with a simple breakdown of how to calculate an expected revenue interval for your channel when using the several modules in Streamloots.

Key Factors That Can Impact Your Streamloots Revenue

First, we’ll briefly describe what variables impact your Streamloots Revenue the most and how they do so. This way, you’ll be able to understand how you’ll be able to make adjustments as a streamer to try to optimize your revenue.

Audience Size is defined by the total reach your channel usually has in terms of viewers. While some platforms use the number of followers to estimate your reach, for revenue estimation purposes, the best metric to take into account is the Average Concurrent Viewership – the average number of people watching your stream during a period.

We’ll use a monthly basis (30 Days) for Average Channel Viewers in the estimation.

Don’t get us wrong: every viewer that participates in your stream is undoubtedly a channel supporter, even if they don’t spend money on the channel. However, for this estimation, we consider Active Supporters those viewers that are super passionate and willing to contribute financially to your stream, through different options, like Twitch Subscribers or YouTube Memberships. Streamloots offers many choices for viewers to support your channel, and we’ll break them down below on the estimation.

Streamloots provides lower friction than any other creator support platform through lots of flexibility in pricing and higher value for viewer investment, so you can expect your percentage of active supporters to increase through Streamloots compared to other options.

This regards how much your Active Supporters contribute financially to your channel monthly, on average. As with Active Supporters, this variable might differ from the type of channel, creator, or category, but we can provide a baseline estimate according to the average creator using Streamloots.

While in some platforms like Twitch or YouTube the most popular form of support has a fixed monthly value (such as Twitch tier 1 Subs at $4.99), in Streamloots the pricing structure is fully customizable by the creator. This means that it is yet another tool at the streamer’s disposal to optimize its monthly earnings.

For the estimation, you can consider the Monthly Average Contribution from Active Supporters through Streamloots (for small streamers) in an interval from $16 to $33. However, this amount can easily double or more with larger audience sizes.

For this estimate, we’ll consider four types of creators depending on the size of their audience: small, medium, large and extra-large.

Let’s take the small audience size as an example: a streamer with 25 average viewers in a month can expect Streamloots to have 4 to 8 active supporters who purchase Streamloots packs. Additionally, such streamers can expect to have supporters become Streamloots Subscribers, providing an additional revenue stream in exchange for different viewer rewards. With this in mind, the creator can aim at earning between $80 and $323 in their first month with Streamloots.

As we move towards higher audience dimensions, it’s essential to know that streamers acquire more power in flexibility on how they can optimize Streamloots to their advantage. For example, they can price some collections at a lower price to convert more viewers into active supporters, decreasing the Average Contribution from Active Supporters but increasing the number of Active Supporters. Or you can go the other way: creating exclusive VIP collections for superfans at a premium price, which can increase the Average Contribution from Active Supporters.

Best Practices to Optimize Your Earnings

Here are some tips and practices that you can use to impact the variables mentioned above and see results in your monthly earnings with Streamloots.

Explaining Streamloots in Your Stream

One central success element for streamers using Streamloots is to make sure viewers understand the concept of Packs, Subs, and Auctions. This reduces a lot of friction and obstacles for first-time buyers and showcases the potential and value of Streamloots for viewers.

When using Streamloots for the first time, a great idea is to take 5 minutes of your stream to guide viewers through their point-of-view on the platform. Then, test redeeming some cards and showing what the community can expect: this way, you’ll be able to convert more viewers into Active Supporters.

Different Collections and Prices for Different Types of Supporters

Use one of the platform’s significant strengths: the total flexibility at the creators’ disposal. Consider creating different tiers of collections with different prices that can suit a wide range of supporters.

For example, meme packs with sounds and visual alerts at a $1 price can go a long way in bringing many new Supporters, while a VIP pack at $14,99 with high-level interactions can suit well to a few supporters who will value them at that price. And you can use both strategies simultaneously!

If you already have some Twitch Subs or YouTube members on your channel, consider incentivizing your viewers to switch their pledges over to Streamloots Subs instead. Streamloots Subs provide the highest revenue share in all creator platforms for streamers and offer limitless flexibility and independence on perks you can provide to your viewers.

Enabling Streamloots Subs with exclusive rewards that your viewers find valuable will be able to increase your Average Contributions every month.

Find out the best Subs platform for you

Learn Advanced Tips from other Streamers

The Streamloots Community is one of the best hubs for creators to learn new ways to expand their business and creativity. We often highlight streamer ideas and achievements in our channels to share and use the knowledge for the greater good. For example, did you know that streamers who read this blog earn on average 2x more than those who don’t? And don’t forget to join our Discord as well!

Subathons are great ways to boost a streamer’s income with a special event, but with Streamloots, the support from Subathon can be worth more for you and your viewers! Streamers that use Streamloots to coordinate and manage their Subathons can get on average 38% more profit when using the cards and subs integrations.

Learn how to create a fully automated Subathon with viewer interactions through our free Subathon tool.

How to Run a Subathon with the FREE Timer Tool