You are here: Home / Special dates / Unlock and Earn Rewards in the Streamloots Arcade Week! 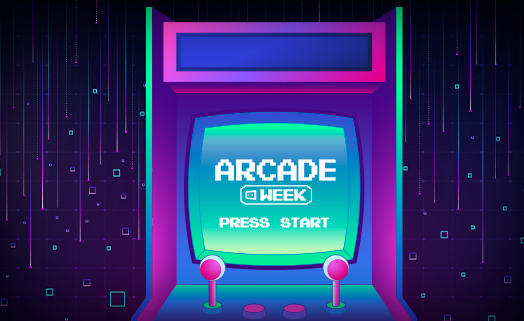 Gather your tickets! The Streamloots Arcade Week has arrived!

We were feeling nostalgic about the times when we’d just spend endless quarters in the arcade, so this week we’ve decided to create our own. And even better: you’ll stand to win prizes from it including a gaming console and a laptop!

Starting from right now until May 23rd at 00:01 Pacific Time (09:01 AM CEST / 03:01 AM EST) streamers and viewers will be able to unlock the Arcade Week Giveaways and win prizes – including a gaming console and laptop – just by using Streamloots as usual.

If you’re streaming this weekend, make sure to share with your community how they’ll be able to participate and which prizes they can win. Read below to know all details about it and let viewers know about it!

During the Arcade Week, streamers and viewers will come together in a community-wide effort to unlock up to 9 rewards, which become available as giveaways prizes after being unlocked. The entire community can enter and participate, as both streamers and viewers become eligible to win the giveaways simply by using Streamloots as usual – no new actions or steps are required.

You’ll be able to track the community progress in unlocking rewards by following the Arcade Week Progress Bar which just launched on the Streamloots platform!

Check out the Arcade Week progress!

How Can I Participate?

During the Arcade Week, and in the spirit of a true arcade room, everything revolves around Arcade Tickets. Actions done using Streamloots will earn Arcade Tickets, and reaching certain high scores of Tickets will unlock the rewards and giveaways. The individual number of Arcade Tickets every user has will count towards participating in the giveaways.

If you’re a streamer

Every $0.5 you sell in Streamloots Packs and Subs will earn you one Arcade Ticket for the Arcade Week Giveaways. This means that the more Packs or Subs you sell during the weekend, the more entries you’ll submit for all the Giveaways, and the more chances you have of winning the prizes.

If you’re a viewer

In a similar manner, every $0.5 purchased by a viewer in Streamloots Packs and Subs will earn them one entry participation for the Arcade Week Giveaways. Likewise, the more Packs or Subs a viewer purchases during the weekend, the higher their chances of winning a prize.

What are the prizes?

We wish you could tell you yet, but unfortunately, they’re hidden away behind the Arcade high-score goals, so we’ll need to work towards unlocking them. We can give you a small leak, though: two of them allow you to play lots of games in them…

Are there specific prizes for streamers and viewers?

During Arcade Week, the pool of prizes is shared for both streamers and viewers – so the entire community is eligible to win any of the prizes unlocked.

Can I participate if I’m a small streamer?

Of course! As soon as you earn Arcade Tickets, you’re participating. The more Tickets you get, the better chance you have to receive some great rewards from the Arcade Week.

Why should I get as many Arcade Tickets as possible?

How does the progress bar work?

The progress bar accumulates all Arcade Tickets generated by the Community in this Arcade Week. When you earn Arcade Tickets, the bar progresses. Remember, everyone across Streamloots is working together to unlock the next rewards.

How are the giveaway participations related to Arcade Tickets?

1 Arcade Ticket is equal to 1 participation (i.e., one chance) in the giveaways, so the more Arcade tickets you accrue, the better odds you’ll have to win.

How long do I have to get Arcade Tickets?

When will the prizes be handed out?

If you’re the recipient of a giveaway prize, you can expect to be contacted the week of May 23rd, 2022 via email.